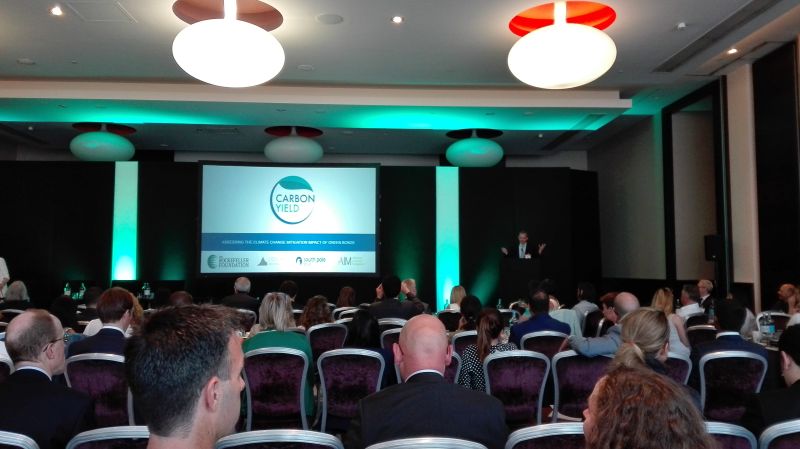 Launched today, the Carbon Yield quantifies the climate change mitigation that Green Bonds enable, allowing issuers and investors alike to better understand the impact of their activities and portfolios. The methodology for calculating the Carbon Yield is publicly available at www.carbonyield.org.

Pioneered by Lion's Head Global Partners, South Pole Group and Affirmative Investment Management (AIM), with support from The Rockefeller Foundation, the new methodology comes at a time when the Green Bond market is set to exceed $100bn in issuance and demand continues to outpace supply.

Green Bonds have steadily become one of the most successful instruments for socially responsible investors to harness the power of capital markets in the fight against climate change, allowing for the scaling up of climate change mitigation and adaptation activities. The "greenness" of Green Bonds to date, however, has been a largely qualitative attribute. As the Green Bond market moves towards a greater understanding of what investments enable, methodologies such as the Carbon Yield provide a common framework for issuers and investors to communicate the impact of their cash flows on the environment and enabling more transparent communications - ultimately catalysing further investment in the segment.

Providing a common language on the GHG emissions abatement impact of Green Bonds.

Despite significant progress in the harmonisation of reporting across issuers and established voluntary guidelines, such as the Green Bond Principles and Climate Bond Standards, there is no common language in the market for quantifying and communicating the emissions abatement impact of Green Bonds. Whilst many issuers already collect the necessary data to disclose the mitigation impact of their projects, the market does not have a consistent, uniform metric to refer to. The open access Carbon Yield methodology provides a common approach to the market resulting in acomparable metric quantifying the mitigation impact of Green Bonds on a prospective basis in terms of GHG emissions avoided per unit of capital per annum through the financed activities.

The Carbon Yield methodology is designed to be used by green bond issuers and investors, and is being pioneered by AIM as part of their annual impact reporting published in June 2017, reporting on the mitigation impact per year per $/€1,000 of their impact bond funds.

"Mitigating climate change as an investor requires transparency and a possibility to measure. As we all know "what gets measured gets managed". The carbon bond yield method will give you a chance both on measuring and on transparency. This could become an important tool for long-term investors when allocating money and communicating why," says Mats Andersson, ex-CEO AP4

"We are proud to be part of pioneering such a pivotal breakthrough in the Green Bonds space," says Renat Heuberger, CEO, South Pole Group. "Estimating the positive climate impact of green investment is key in unlocking the trillions needed to help curb climate change. We believe that Carbon Yield is the missing piece of this puzzle and unique in its ability to align market players."

"Having been at the forefront of the green bond market since the beginning, the AIM team considers the Carbon Yield an important step forward in providing a common approach to measure and articulate green bond mitigation impacts. We are proud to co-develop and be the first to apply the methodology. AIM remains committed to the continued development of environmental and social reporting tools, promoting greater accountability and integrity in the green bond market," says Stuart Kinnersley, Co-Founder and CEO, AIM.

"We have been delighted to see the pace at which investors have increased allocations to socially responsible investments, especially the Green Bond market. We see the Carbon Yield as the next step in the Green Bond market's evolution to encourage greater participation in the sector and to enable policy makers, NGO's, issuers and investors to monitor the impact and progress of their capital. It has been a privilege to work with our partners to develop the methodology and we look forward to working with all stakeholders to adapt it in the future, as technology enables more accurate reporting systems to develop," says Christopher Egerton-Warburton, Partner, Lion's Head Global Partners.

"Climate change is a global challenge with devastating daily consequences, particularly for cities and vulnerable populations around the world. At the same time, the cost of minimizing those impacts is staggering, with estimates around $1 trillion annually—we cannot afford to invest in ineffective green projects," says Saadia Madsbjerg, managing director at The Rockefeller Foundation. "The Rockefeller Foundation is proud to support the development of the Carbon Yield to quantify the real mitigation impact of green projects, resulting in increased investments for projects with the greatest environmental impact."