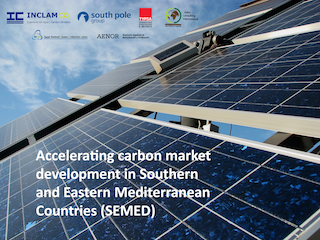 The European Bank for Reconstruction and Development (EBRD), with financial backing from Spain, is supporting the transition to low carbon economies in the Southern and Eastern Mediterranean (SEMED) region with the launch of a new series of market-based programmes to reduce carbon emissions.

The EBRD's “Carbon Crediting Approach in SEMED" will promote the development of Integrated Carbon Programs (ICPs) for the region, which in the EBRD context comprises Egypt, Jordan, Morocco and Tunisia. ICPs are comprehensive packages that include policy dialogue, technical assistance, carbon pricing for greenhouse gas (GHG) emission reduction projects and associated results-based payments.

Following the successful conclusion of the COP21 Paris Climate Agreement, a key focus has been placed on the development of market-based instruments to help reduce carbon emissions. Both climate finance and carbon markets are expected to have an important role in delivering the transition to low-carbon economies.

The project in SEMED is the first ICP starting to run. Funded by Spain, the overall goal of the project is to identify an appropriate approach to put a price on carbon credits resulting from renewable energy projects developed in the region, herein including the lessons from the Clean Development Mechanism.

The 3-year long contract has been awarded to a consortium led by the Spanish firm INCLAM CO2 and includes partners such as South Pole Group, TYPSA, AENOR, Enviro Consulting International (ECI) and the Egypt National Cleaner Production Centre (ENCPC). The consortium will work in close collaboration with the renewable energy project sponsors, authorities in the SEMED region as well as the Spanish Climate Change Office from the Ministry of Agriculture, Food and Environment of Spain.