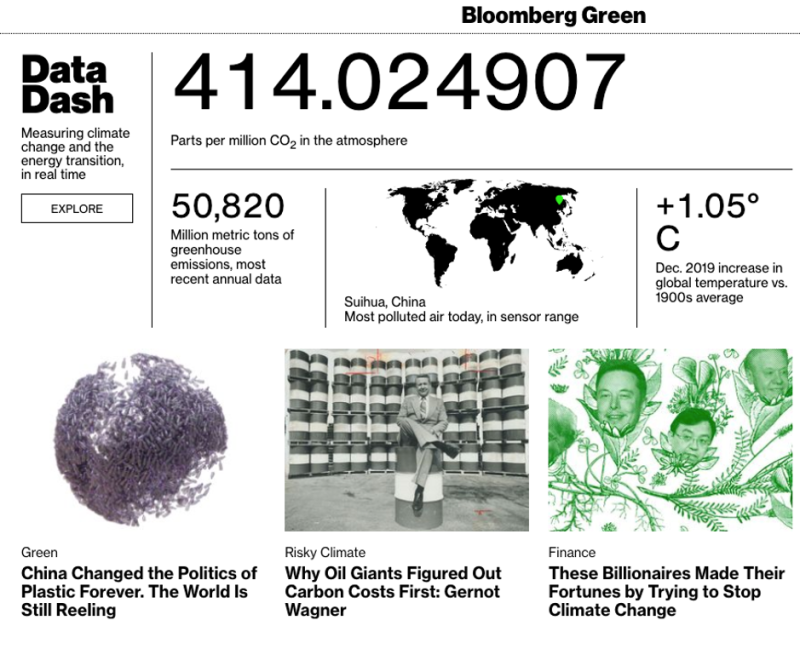 Drawing on Bloomberg's global newsroom of 2,700 journalists and analysts across 120 countries, Bloomberg Green will center on the business, science, and technology of climate change. The brand will utilize Bloomberg's deep data expertise to produce original reporting and solutions-driven coverage, as well as business and investment focused content. Bloomberg Green starts with an established audience for climate, sustainability and green finance coverage, as Bloomberg News already publishes hundreds of stories each month on these subjects across its platforms.

"We want Bloomberg Green to be the indispensable guide to anyone who wants to understand the great transition that is climate change ⁠— investors, politicians, chief executives and scientists to be sure, but also clever readers everywhere," said John Micklethwait, Bloomberg Editor-in-Chief. "Our hope is that it will bring clarity and data where there is currently fog and fear ⁠— just as Bloomberg has brought light to other once opaque subjects."

Founding Partners for Bloomberg Green include Amazon, HP Inc., JLL, PGIM and Tiffany & Co. These companies -— together representing the retail, technology, real estate, financial services and luxury industries — have committed to supporting Bloomberg Green across its launch year in an effort to address critical issues related to climate and sustainability. This includes participation in the inaugural Bloomberg Green live event, as well as custom content and integrations created by Bloomberg Media in collaboration with each Founding Partner. Presenting sponsors, including Iberdrola, will also support Bloomberg Green activations throughout the year.