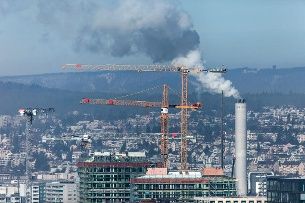 Climate change also has consequences for the Swiss financial markets: investments in companies which emit a lot of carbon dioxide could plunge in value, wiping billions off stock markets and pension funds, according to a government study.

The first study of its kind, carried out on behalf of the Federal Office for the Environment, revealed on Friday how the Swiss stock market currently finances the equivalent of 52.2 million tonnes of carbon dioxide abroad – the entire amount of CO2 emitted by Switzerland in 2013.

The study looked at 80% of the stock held in Switzerland – investments worth around CHF280 billion ($283 billion) – as well as the foreign shares of 11 of the 25 largest pension funds, worth some CHF33.2 billion. These pension fund shares are invested in around 25 million tonnes of CO2 – 6.4 tonnes per insured person – the report said.

The greater the efforts to hit the international target of a global temperature increase of less than 2 degrees Celsius, the greater the potential losses for investors in fossil fuels. This would result in a so-called carbon bubble, the authors wrote.

The costs of this for the Swiss stock market would be between CHF1 billion and CHF6.75 billion. The latter figure represents just over 1% of gross domestic product.

If the pension funds had to bear the CO2 costs, in the worst-case scenario it would correspond to around a fifth of old-age pensions currently paid out.

Investors are largely unaware of these risks – and if they are aware of them, they don't pay them much attention.
The Federal Office for the Environment is therefore calling for targeted information and more transparency on a political level. Switzerland could play a pioneering role regarding climate-friendly investments, the office said.

The Swiss carbon study came out on the same day that a United Nations assessment said plans submitted by 146 countries for the climate conference in Paris could cut average global emissions per capita of greenhouse gases by up to 8% by 2025 and 9% by 2030 compared with 1990 levels.

The office of UN climate chief Christiana Figueres didn't directly assess the pledges' impact on the goal of keeping the rise in global temperatures below 2 degrees Celsius by the end of this century compared with pre-industrial times.

However, Figueres pointed to an International Energy Agency assessment that they would result in a 2.7-degree increase, compared with 4 to 5 degrees with no action.

"It is a very good step, it is actually a remarkable step, but it is not enough," she told reporters, making clear that she doesn't consider the pledges the last word.

Scientists say a temperature rise of more than 2 degrees Celsius could result in profound and irreversible impact on the climate, including flooding of coastal cities and island nations and disruptions to agriculture and drinking water.

The UN examined pledges submitted by October 1, which came from all the industrialised countries and three-quarters of developing countries and accounted together for 86% of greenhouse gas emissions. A further ten plans have been submitted since then.

This article was originally published on swissinfo.ch