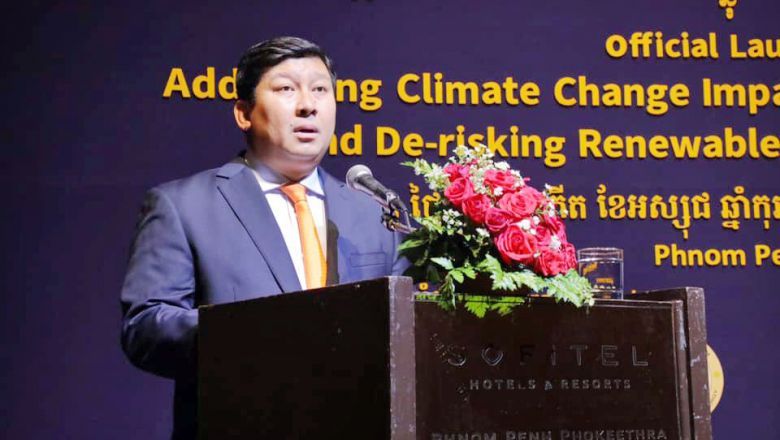 Minister of Environment Say Sam Al at the official launch of the National Council for Sustainable Development's first two reports on how climate change and investment risk in the renewable energy sector could affect the economy on Friday.

The National Council for Sustainable Development (NCSD) of Cambodia released its first reports on how climate change and investment risk in the renewable energy sector could affect the economy.

The two reports, Addressing Climate Change and Economic Growth in Cambodia and De-Risking Renewable Energy Investment in Cambodia, were released at a press conference at the Sofitel Phnom Penh Phokeethra hotel on Friday.

The report, De-Risking Renewable Energy Investment in Cambodia, was prepared by UNDP Cambodia, Kamworks and South Pole and it provides the first in-depth analysis of investment risks and opportunities in all four sub-sectors for solar PV development in Cambodia.

Cambodia is among countries in the world that's most vulnerable to the effects of climate change.

The NCSD said the reports were made in collaboration with the Ministry of Economy and Finance and the Ministry of Mines and Energy, with support from the Cambodia Climate Change Alliance Programme Phase 3 (CCCA-3) and the UN Development Programme (UNDP).

The NCSD said the reports offer solutions to the impacts of climate change on economic growth in Cambodia and reducing investment risk in renewable energy.

“The reports have been compiled to contribute to risk reduction, while creating a favourable environment for those looking to invest in adaptive measures, such as solar energy, to tackle the effects of climate change in Cambodia," said an introduction to the reports.

A brief report on solutions to the effects of climate change on economic growth in the Kingdom said that by becoming one of the first countries to implement the Climate Public Expenditure and Institutional Review (CPEIR) programme, which includes many other initiatives related to impact mitigation, Cambodia has played a leading role internationally in responding to climate change.

“The government's response to climate change is a strategy aimed at meeting the Cambodia Climate Change Strategic Plan (CCCSP) and Climate Change Action Plan (CCAP) of 2013, apart from Nationally Determined Contributions (NDC) in implementing the Paris Agreement on Climate Change of 2015.

"These plans set out many priorities focusing mainly on large sectors likely affected by climate change," it said.

NDCs are a commitment by nations to cut carbon emissions by a specified amount.

Ministry of Environment spokesman Neth Pheaktra said the reports, which have been submitted to the government and development partners, recommended policies for supporting investment in climate change adaption. This, he said, will reduce the negative effects on the economy.

"The reports also found that investment in just 700MW of solar energy could directly reduce around 8.7 million tonnes of carbon dioxide emissions by 2045," Pheaktra said.

Greater instances of flooding, drought and storms would reduce resource productivity, especially in the agriculture and fisheries sectors, which would suffer the most serious losses due to serious climate incidents, it added.

Climate change would also affect the supply of water, as well as roads and other infrastructure.

Without serious climate change effects, the Kingdom's Climate Economic Growth Impact Model (CEGIM) predicts that GDP will grow by 6.9 per cent on average each year from 2017 to 2050.

This will put Cambodia on track to reach upper-middle-income country status in 2035. However, climate change will reduce GDP if no preventative measures are put in place.

In April last year, Cambodia became the first country to develop and apply a CEGIM.

More on this news from South Pole : Smart de-risking instruments for renewables could lead to USD 146 mn in economic savings in Cambodia