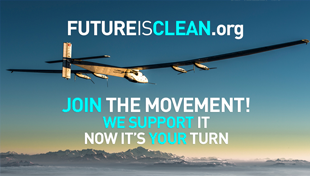 As the COP 21 negotiations draw closer, Solar Impulse, a long-range experimental solar-powered aircraft project initiated by Swiss explorers Bertrand Piccard and André Borschberg, urges practical, cleantech solutions for a sustainable future. As part of this project, the two explorers have initiated the #FutureIsClean campaign and are attempting the first "Round the World Solar Flight" to demonstrate that clean technologies and renewable energies can achieve the impossible.

The campaign has brought together a number of organisations pushing the replacement of old polluting devices. It has also received the backing of influential figures such as Christiana Figueres (Executive Secretary of the UNFCCC), Achim Steiner (Executive Director, UNEP), and Richard Branson (founder of Virgin Group), among others.

An advocate for clean technologies, the South Pole Group has now joined the supporters of the #FutureIsClean.

"For us, sustainability is a huge market opportunity. Savvy organisations that understand its potential and offer the right solutions will be extremely successful while fighting climate change. South Pole Group is here to help them," says Renat Heuberger, CEO of South Pole Group.

As part of showing support for the campaign, the South Pole Group employees have attempted their first "Round the World Paper Plane Flight" to keep the important message flying across the globe.