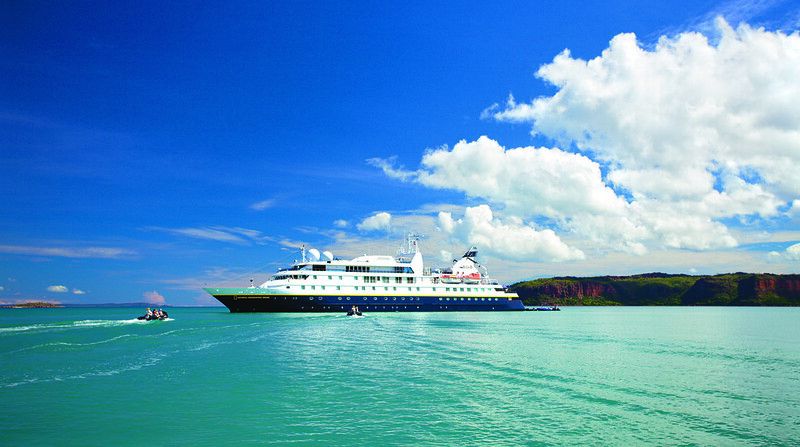 Lindblad Expeditions has made its name as a leader in responsible tourism, taking its ships to sensitive areas such as the Galapagos, Alaska and Antarctica. But to get to those destinations, its 13 ships have been burning enough fuel to account for nearly all of the 50,000 metric tons of carbon dioxide it creates every year.

Last week, Lindblad said it would offset 100 percent of its carbon footprint by investing in projects that will reduce emissions elsewhere. The carbon offsets, or carbon credits, will include solar projects in Mexico and India, wind power in Vietnam, reforestation efforts in Peru and Zimbabwe, and a cookstove project in Rwanda.

Sven Lindblad, chief executive and founder of Lindblad Expeditions, said in a statement that "global climate change is arguably the greatest threat humanity has ever faced," adding that "we all need to urgently step up our efforts whether big or small."

Many U.S. companies are taking note of the urgency of recent climate reports and are changing corporate policies. From carbon credits to eco-labeling to energy use, companies are responding to warming temperatures and consumer concerns. Those that do not can run into unflattering public relations issues, as Procter & Gamble recently discovered when it was accused by an environmental group of cutting down trees in Canadian boreal forests to make Charmin toilet paper.

In a survey by the consulting firm Deloitte, 84 percent of business decision-makers said they were aware of grave U.S. and global climate-change reports issued in late 2018. And two-thirds of those familiar with the reports have reviewed or changed their energy management strategies in response, the survey said.

Those companies, for example, have directed more of their energy purchases toward wind and solar, especially as those sources become cheaper than fossil-fuel-driven power.

Half of the business decision-makers surveyed by Deloitte said that cutting costs was their top priority, but 39 percent said they made some decisions because they were just the "right thing to do," an increase of 11 percentage points over the previous Deloitte survey.

The poll covered 600 business decision-makers at companies with 250 or more employees, as well as 1,500 individual utility customers.

"Business is all in," said Marlene Motyka, a principal at Deloitte focused on renewable energy. "They are looking to reduce costs and set goals across the spectrum."

Microsoft is one of those companies. Since 2009, Microsoft has made commitments to shrink its carbon footprint. But in April, company president Brad Smith said in a statement that "the magnitude and speed of the world's environmental changes have made it increasingly clear that we must do more."

Smith said that the tech behemoth would nearly double its ­seven-year-old internal carbon fee to $15 a metric ton, subjecting its own project evaluations to a test that is not yet government policy.

The company will also trim carbon associated with construction materials and slash carbon-intensive electricity use. It hit ­renewable-energy targets for its data centers well ahead of schedule and has set a new target so that renewable energy will make up at least 70 percent of its usage by 2023, Smith said.

CDP, formerly known as the Carbon Disclosure Project, has also found shifts in corporate attitudes and choices­ related to climate change — even as the Trump administration denies the existence of a problem.

"The risk and the threat is here. It's now, and it's urgent," said Bruno Sarda, president of CDP. "It requires action that goes faster than the current trajectory. The risk of inaction is greater and is likely severely underpriced. The good news is we do believe there's a lot of benefit to be gained."

CDP said that 225 of the world's 500 biggest companies say that climate change could generate more than $2.1 trillion of potential new business. More than half of that money would flow to financial institutions, which can move money into low-carbon projects and manufacturing. And more than a quarter of the money could flow into manufacturing ventures, such as electric-car makers.

"What business is telling us is that they see a lot of upside in pursuing that transition," Sarda said.

Companies see huge risks — and see them coming within the next five years. CDP said companies think that about $970 billion in assets are at risk. Approximately $250 billion of that would be linked to writing off assets, including "stranded assets" that will no longer be needed as a result of climate change. Those could include fossil fuel reserves or power plants that might be shelved as the planet moves to a low-carbon economy, CDP said.