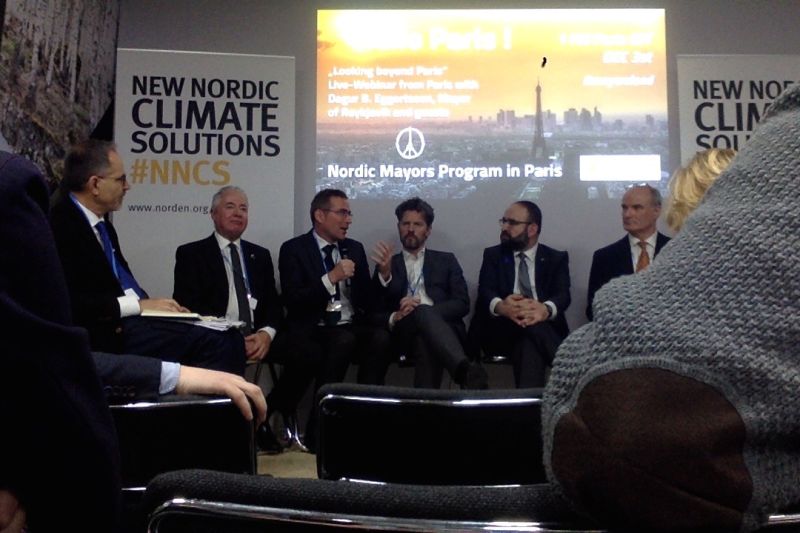 City and country pledges to become carbon neutral or fossil free have become powerful messages in the quest for a low-carbon future. This topic was at the heart of discussions at the Nordic Mayors' event.

The event in Paris was organised by the Nordic Mayor's Initiative, as part of a series of events with Nordic Mayors at the COP21 climate summit.

Daggur Eggertsson, Mayor of Reykjavik said that geothermal energy and hydropower will enable his city to become fossil free. Bo Frank, Mayor of Växjö (Sweden), the first city pledging to become carbon neutral, explained how they cut greenhouse gas emissions by more than 40% in the last 20 years thanks to, among others, district heating based on wood and energy efficient buildings.

Mehmet Kaplan, Swedish Minister for Housing, Urban Development and Information Technology, emphasised the role of cities in enabling his country to meet its fossil free pledge. Renat Heuberger, CEO, South Pole Group, made clear that technically, any city can go carbon neutral as the technology for decarbonising transport, buildings, waste, energy is already available. In his view, the current roadblocks in furthering the carbon neutral agenda often boiled down to lack of political will and/or finance. Carbon-neutrality strategy Renat nonetheless welcomed the pledges by many cities to become carbon neutral within their boundaries, but emphasised that a comprehensive carbon-neutrality strategy should also take into consideration the reduction of greenhouse gas emissions that occur beyond city boundaries (but that are still linked to cities).

For instance, a great deal of cities often need to import food and electronic equipment from far away – thus creating greenhouse gas emissions in the supply chain of the city. Professor David Simon, Director of Mistra Urban Futures reminded that cites in the North and South must continue exchanging lessons, and that cities in Europe should also look to learn from innovative approaches in developing countries.

All panelists agreed that more needed to be done with regards to sharing lessons learnt and in supporting cities in the South. The two relevant Climate-KIC initiatives currently supporting these goals include Cityactions.org, a platform for cities to share information, and the Low Carbon City Lab, driving innovation on financing low-carbon cities, particularly in developing countries. Under the Low Carbon City Lab, South Pole Group and Climate-KIC will work together with the Nordic Mayors Initiative to further assist Nordic cities in becoming carbon neutral and to transfer this knowledge to cities in developing countries.