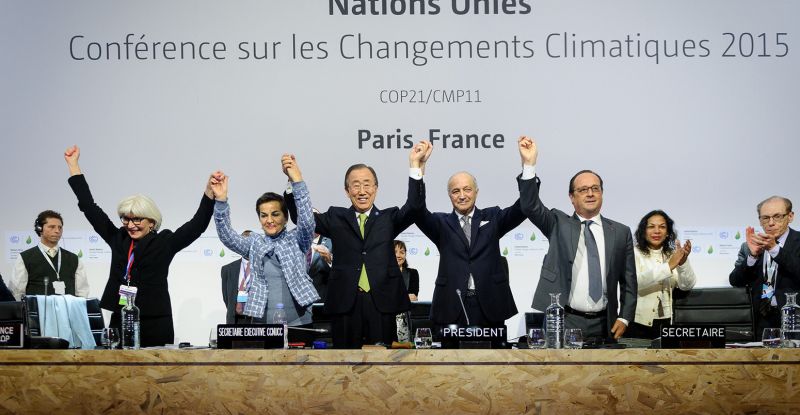 On the 12th of December, 195 countries and the EU approved the Paris Agreement at the UN's 21st Conference of the Parties (COP21) in Paris. The agreement signals a landmark step in countries acknowledging the reality of climate change and the need to take immediate action. Once ratified, the agreement will set the world on a low-emission path that will have a transformational impact on societies, economies and the environment.

As a result of the Paris Agreement, South Pole Group expects more demand from the public and private sector for its climate-friendly range of solutions in the next years. South Pole Group's products and services help governments, cities and a wide range of industries (energy, forestry finance, water, retail) to #readyfor2020 - to measure, report and reduce their carbon footprint and become more sustainable by 2020 and beyond.

"The Paris Agreement sends a strong, positive signal to both the private sector and governments that investment in climate-friendly technology will pay off," emphasises Renat Heuberger, CEO, South Pole Group, who participated in many of the events at the climate negotiations. "And while we don't have a concrete timeline for phasing out fossil fuels, this agreement is nonetheless a game changer for our fossil-fuel powered world, ushering in an era where investments and innovations into renewable energies will be more dynamic than ever."

The final climate agreement goes further than many optimists had hoped for: Countries have committed to keeping global temperature rise well below 2-degrees Celsius, ultimately aiming for an ambitious figure of 1.5-degrees Celsius. This represents a success especially for the small island nations that pushed for its insertion. Under the agreement, all countries are obliged to submit their intended climate actions every five years, and these plans will undergo an international review process. Up to 2030, developed countries will mobilise even more finance for climate action in developing countries than the USD 100 billion they initially committed to raise by the year 2020.

The Paris Agreement also establishes a new market mechanism that will allow countries to finance climate actions in partner countries and account for the achieved outcomes. Marco Hirsbrunner, Director of Projects, South Pole Group, notes that "the establishment of a new market mechanism is one of the major achievements under the Paris Agreement. After years of stalemate in the negotiations and low carbon prices, we expect to see a revival of international carbon markets by 2020 and beyond."

The two-week negotiations opened with well-timed announcements, such as the launch of the "Breakthrough energy coalition", initiated by Bill Gates and uniting the efforts of two dozens of other billionaire philanthropists such as Richard Branson, Mark Zuckerberg, and Jeff Bezos to sponsor clean energy. COP21 also saw over 400 investors with more than USD 24 trillion of assets sign the Global Investor Statement on Climate Change, the largest-ever number of investors supporting government action on climate change.

"We believe that cities and the private sector will scale up their climate actions in the next years thanks to the outcomes of these climate negotiations," states Martin Stadelmann, Practice Leader Climate Finance & Cities, South Pole Group. "The agreement effectively recognises the importance of private players and cities in helping national governments implement the goals they have set for themselves. To savvy companies this obviously presents a huge business opportunity. We believe that the climate deal will further accelerate the ongoing actions of national governments, cities, regions and the private sector who have invested a record $391 billion in climate finance in 2014 and pledged substantial actions even before the Paris conference."

Join us for a 45 minute webinar on 14 January 2016 at 17.00 CET to explore what the Paris Agreement brings in terms of business opportunities for you, and how you can take the lead to get #readyfor2020. Register here.

South Pole Group is committed to help the public and private sector translate the Paris Agreement into ambitious climate action and support countries in the implementation of the new market mechanism, building on its experience of developing more than 400 climate-friendly projects in the global carbon market. In the next five years, South Pole Group plans to increase its number of experts working on climate change solutions in order to solidify its position as the world's premier provider of sustainability solutions.