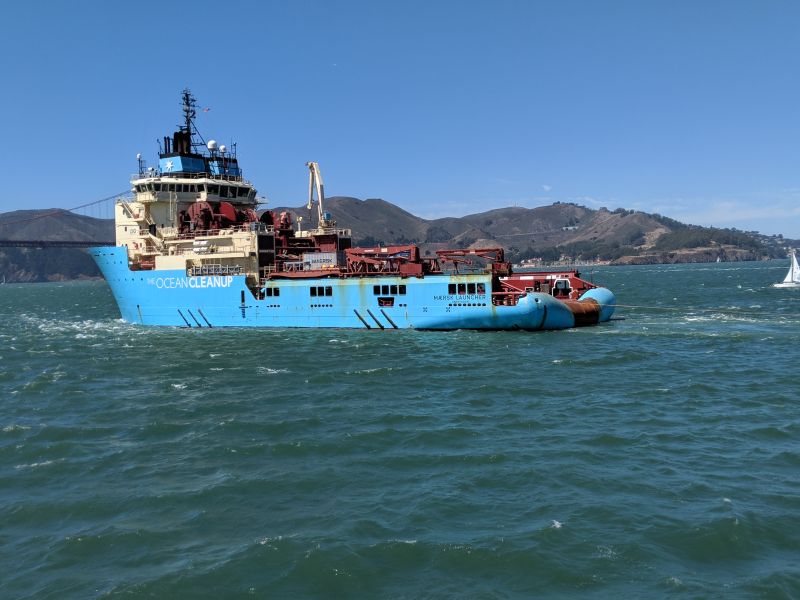 After 5 years of research, engineering and testing, The Ocean Cleanup has launched the world's first ocean cleanup system (System 001) from San Francisco Bay, marking the start of the cleanup. South Pole is helping The Ocean Cleanup compensate the CO2 emissions of the vessel transport associated with System 001 by supplying clean hydroelectric power to the remote mountain communities of Huóshuĭ, China.

The journey of the tow through the bay was live streamed from 12 pm PT until the system had left the bay, crossed Golden Gate Bridge and sailed off onto the Pacific Ocean.

It will take 3-5 days to complete the transfer to the Pacific Trials testing area, where System 001 for the first time will be installed in its operational U-shape configuration. The system's behavior will be extensively monitored during this final rehearsal, which is expected to last around two weeks.

“I am incredibly grateful for the tremendous amount of support we have received over the past few years from people around the world, that has allowed us to develop, test, and launch a system with the potential to begin to mitigate this ecological disaster. This makes me confident that, if we manage to make the technology work, the cleanup will happen," says Boyan Slat, CEO and founder, the Ocean Cleanup.

"Plastic waste, especially in oceans, is rising up the scale of global environmental concerns," says Natalia Gorina, Sales Director Carbon & Renewables, South Pole. "The grouped small hydro project we are using to compensate the GHG emissions associated with the vessel transport for System 001 shares the inspiring mission of the Ocean Cleanup: to deploy smart technologies to make the planet a cleaner place for all."