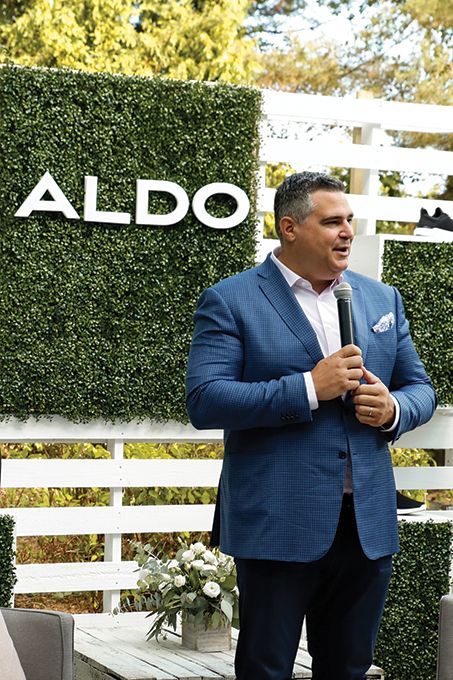 This story is by Jennifer Horn and was first published by strategy.

The Aldo Group was, until recently, the footwear industry's best-kept green secret.

In August, the Montreal-based shoe company began rolling out signage across its North American retail network announcing its commitment to climate neutrality. The marketing push came shortly after the launch of its first sustainable shoe collection, RRPL (pronounced “ripple"), in partnership with biomass tech company Bloom.

True, Aldo has been more actively marketing sustainability over the last year, recently announcing the elimination of shopping bags from its Aldo and Call It Spring banners – only a few months after declaring the latter had gone “fully vegan."

But these efforts are actually a part of a long-running green mission that began with its decision to examine its carbon footprint in 2013. Since then, the retailer has reduced its carbon emissions by 46% and claims to have become the first fashion footwear company in the world to be certified climate neutral.

However, it wasn't until last year that the brand decided to share details of its sustainability journey more publicly, notes Valerie Martin, the brand's VP of communication, culture and CSR. It took time before Aldo “felt genuine and there was no greenwashing, and that we could actually prove every single point."

There are many steps to be certified as “climate neutral" by South Pole, the Zurich-based global organisation that helps businesses and governments “decarbonize" their activities. Measuring your carbon footprint – which Aldo began doing first through a consultant before hiring its own internal carbon experts a year later – is only the first step.

After quantifying their emissions, businesses must meet robust Scope 1 and Scope 2 carbon reduction targets, classifications that include direct and indirect emissions under their control, such as those stemming from its vehicles and buildings, as well as electricity use, explains Simon Broquet, manager of sustainability at Aldo. Most companies tackling their carbon footprint begin there, he says, because it's “manageable, realistic, and can be done in an okay time frame."

Aldo first met these targets in 2018, and became climate neutral in its offices, stores and distribution centres.

But addressing what's known as Scope 3 emissions – which include supply chain emissions such as travel, procurement, waste and water – is a “totally different game," Broquet says, one that requires a lot more time, expertise and communication with business partners. Aldo reached that milestone in August, receiving additional climate neutral certification for all its e-commerce shipments and transportation.

To be truly carbon neutral, a company must look to further offset emissions that cannot realistically be eliminated from its practices by purchasing carbon credits – that is, by investing in carbon offset projects.

To do this, Aldo is working with South Pole on projects that convert dirty energy into clean energy in the global regions that it operates, says Broquet. This year, its investments include U.S. and Vietnamese wind farms and Chinese hydropower projects, for example. Aldo's commitment has to be long-term for the investments to pay off, as Aldo customers still aren't ready to pay double or even 25% more for products that are more sustainable, says Martin. “We need to become sustainable and still offer a product with a good quality and a good price."

That doesn't mean the business case won't prove itself out as consumers recognize greenwashing and begin to put their dollars behind companies that have made tangible progress on sustainability.

“Will there be a business case soon? Probably," says Martin. “Retail has changed so much in five years, I can't imagine what it's going to be like five years from now."