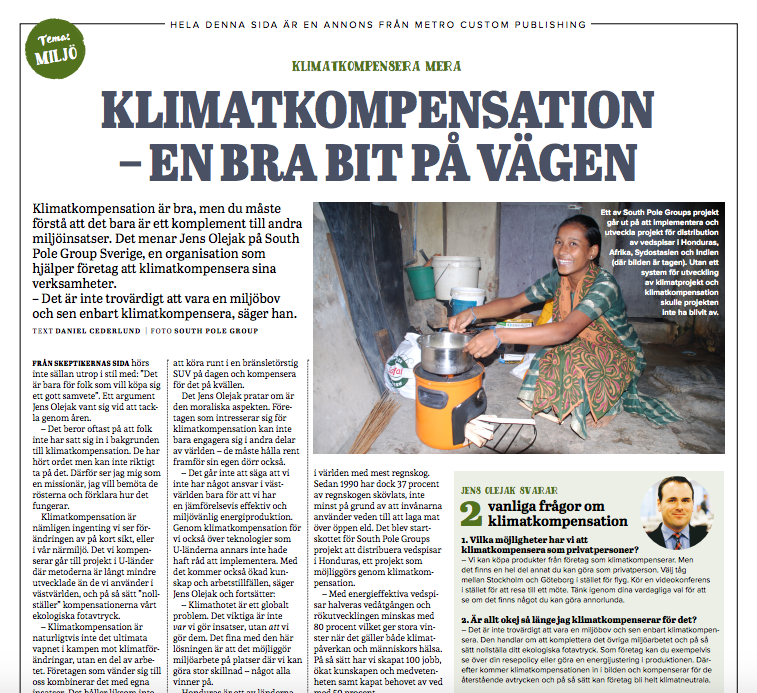 "Carbon offsetting is good, but you must understand that it is only one part of other environmental efforts," emphasises Jens Olejak, Managing Director Sweden & Director Sustainable Energy at South Pole Group, speaking to Metro Sweden. "It is not credible to be an 'environmental villain' and then just do carbon offsetting."

The frequently used argument by skeptics comparing carbon offsetting synonymously with "buying good conscience" is not a new one to Jens Olejak, Managing Director Sweden & Director Sustainable Energy at South Pole Group. "This misconception is often linked to the fact that people have not done much research into the background of carbon offsetting. They have heard about the concept but are not quite sure about how it works in practice. Therefore, I see myself as a sort of ambassador for the solution - I want to respond to any doubtful voices and explain what it actually means."

Carbon offsetting does not have an impact in the short term or translate into visible changes in our immediate environment. Offset projects are usually located in developing countries where the means to curb emissions need to be further developed. As emissions are global, this activity also serves to offset an ecological footprint elsewhere.

"Carbon offsetting is obviously not the only means to use in the fight against climate change, but it supports the overall work of doing so. The companies that turn to us for offsetting often combine it with their other environmental efforts. It is not about driving around on a fuel-gobbling SUV during the day and making up for it at night!"

For Jens Olejak, offsetting also links to the moral aspect of taking action. The companies that are truly interested in acting for the climate do not simply engage and offset in other parts of the world - they also make sure to do their own environmental housekeeping.

"Carbon offsetting helps finance the expensive technology without which developing countries would not have been able implement offset projects in the first place. The projects also bring along valuable co-benefits such as increased knowledge and jobs for the community involved," says Jens.

"Climate change is a global problem. The important thing is not where we are making the effort, but that we actually taking action in the first place. The beauty of this solution is that it enables climate action in places where we can make a big difference - a solution by which everyone wins."