​More companies are making commitments to achieve net zero targets – but over 60% have either set targets far into the future, or no clear target date 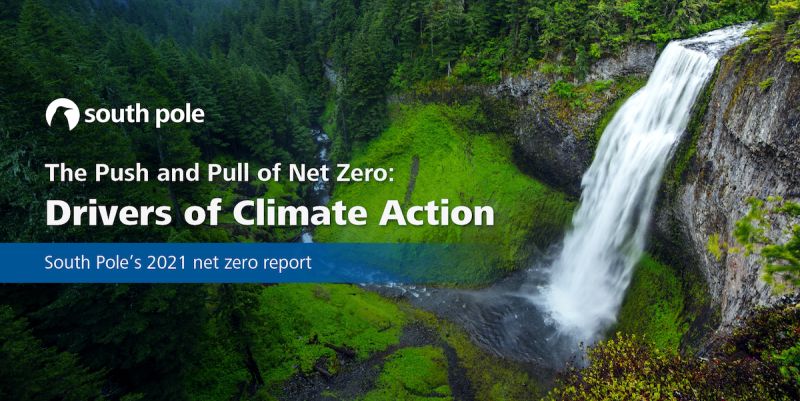 Zurich, October 26, 2021: More companies are making serious commitments to achieve net-zero targets - but less companies are ready to act now. A recent survey by Swiss project developer and climate solutions provider South Pole, The Push and Pull of Net Zero: Drivers of Climate Action, found that - compared to last year - more companies are setting climate targets, but over 60% of them have either set their targets far out in the future, or have not announced any target years at all.

South Pole based its analysis on responses from over 200 companies, representing 15 sectors across five continents. Nearly half of all polled organizations (45%) have set net zero goals, which is similar to last year's findings, however, encouragingly, the survey finds that the total number of respondents with science-based targets (SBTs) to reduce emissions has nearly doubled since 2020 (from 11% to 18%). Similarly, in 2020, none of the respondents had set both a net zero target and an SBT; in 2021, 13% had done so. Both these trends indicate that companies are becoming more serious about their targets and/or are recognizing that a net zero target without a concrete milestone to get there might be conceived as greenwashing.

“ If we are going to get from ambition to action, net zero commitments must also be SMART – Specific, Measurable, Achievable, Relevant, and Time-bound. We all set financial and operational goals for our businesses - the way we create goals for our companies to address climate change should not be any different," said Renat Heuberger, CEO of South Pole.

"We no longer have the luxury of time to question if, but to ask how – and how fast – we can act together to achieve climate net zero emissions. This is why Compass Group UK&I has made its boldest, and most challenging commitment to date – a target for reaching net zero by 2030, and a 1.5C-aligned science-based reduction target for all of our direct and indirect emissions. We support all those pursuing the same objectives, in driving true transformation," said Carolyn Ball, Director for Delivery of Net Zero at Compass Group UK & Ireland, a South Pole client.

Meanwhile, government regulation or policies seem to have very little impact. According to the survey, 'government regulation' was ranked 5th as a driver for companies pursuing net zero targets, signaling that the accountability to reach net zero emissions has not yet been transferred to companies. It seems governments' failure to put in place climate legislation (quickly enough or at all) is curbing the climate ambition of the private sector.

"Without government leadership, the private sector is taking on the responsibility to solve the climate crisis.," said Heuberger. "However, this is just a short term solution. To reach zero emissions by 2050 we need to shift into a higher gear and we need our governments to take the lead. Until then, the results from the survey indicate that businesses are not getting clear enough signals from governments on what is expected of them, and this uncertainty could be the reason why companies are making net zero commitments without clear timelines."

To achieve net zero companies are focusing on decarbonization; technological carbon removals are preferred by those with later targets

While the majority of companies (61%) planned to use technological removal solutions at some point, they were overall the least preferred approach: only 13% of all companies saw technological carbon removals (like Direct Air Carbon Capture and Storage) as their best bet in achieving net zero targets.

And while they are the least preferred option by early movers, they are interestingly seen as the preferred option to offset residual emissions by businesses with a late net zero target date either 2040 (71%) or 2050 (58%).

According to South Pole's net-zero report, The Push and Pull of Net Zero: Drivers of Climate Action, the overwhelming majority of respondents still expect top-down leadership to drive net zero commitments, with 69% indicating that C-level leaders played the most critical roles in achieving targets (apart from sustainability leads), followed by operations (37%) and marketing-communications (34%) departments. Procurement, HR, legal, and finance were ranked the lowest. The results suggest that climate action has not yet been 'democratized' within company structures, leaving a gap in leadership to ensure targets are achieved.

“In order to succeed, net zero targets must become 'whole organization' initiatives," Heuberger said. “We have learned a lot about ourselves and what we can do when we are faced with a global crisis – the pandemic being the most recent example. We know we can produce solutions to resolve the greatest global challenges. And challenges drive innovation on an expedited timeline. Time is no longer on our side, so now we need to make finding solutions our priority – faster."

Alongside mitigation activities and efforts to reach net zero emissions, well over half of polled companies (58%) indicated that climate adaptation was also a key priority for them. However, only 1 in 5 (20%) claimed to have a clear strategy for how their organisation would adapt to the hazards of a warming world. Even fewer, just 7%, have actually increased spending on adaptation-related work or initiatives.

South Pole also compared and contrasted the responses from the Net Zero survey with an analysis of the company's proprietary database of 54,000 companies – including the Global Fortune 500, major stock indices, and all businesses reporting to CDP and GRI. This review found that

These insights indicate that even among large listed companies, the urgency for action is lacking, and that current regulatory and investor pressure do not seem to be strong enough to drive companies towards net zero targets fast enough.

South Pole, recognised by the World Economic Forum as a Social Enterprise, has been at the forefront of decarbonization since 2006. With its global Climate Solutions platform, South Pole develops and implements comprehensive strategies that turn climate action into long-term business opportunities for companies, governments and organizations around the world.

South Pole is also a leading project developer, and has provided nearly 1,000 projects in over 50 countries with climate finance to reduce over a gigaton of CO2 emissions, and to provide social benefits to less privileged communities who are particularly vulnerable to climate change.