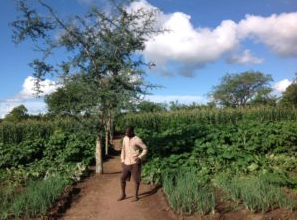 HURUNGWE, Zimbabwe- The just ended El Nino induced drought wiped out crops and livestock, leaving millions of people in Zimbabwe without food. According to figures availed by the Zimbabwean government, more than 4.5 million people were food insecure in 2016, with the number expected to go up as farmers approach the next harvest this year. Though most parts of the country have received good rainfall this season, many small scale farmers did not have farming inputs and tillage power. The shortage of farming inputs coupled with lack of tillage power has resulted in many farmers reducing their hectarage under crops. However, in Hurungwe district, Mashonaland West, small scale farmers mostly, women who benefited from nutritional community gardens spearheaded by Carbon Green Africa are expecting bumper harvests this season.

The nutritional community gardens are part of the the Kariba REDD+ which started in 2011 and running concurrently with various other projects in four districts in the province. The other projects include road development, borehole refurbishment, conservation farming and tree nurseries, among others.

More than 15 nutritional community gardens have been established in these four districts in Mashonaland West province after necessary trainings. The nutritional gardens improve household nutrition and enhanced a healthy life.

Jenifer Nyangumbe of Village 27A in Hurungwe district said the gardens had improved nutrition at household level in the area.

“As you can see, Iam very healthy, so are our children," Nyangumbe said with a smile.

She is running the community garden with 31 other women and each woman has a one acre piece of land.

“Our aim is to enhance nutrition at household level and most the food we produce is for consumption but we still sell some. At the end of each harvest each women can get more than $300 from the sale of our produce," Nyangumbe said.

Carbon Green Africa was established to facilitate the generation of carbon credits through setting up REDD+ projects.

The company's competency is having the capability to enable successful conservation projects according to the rules of the Verified Carbon Standard and the Community, Climate and Biodiversity Standard.

And according to the website Climate Friendly the project has prevented emissions of upto 5.5million tonnes of carbon dioxide per year.

The United Nations created the REDD+ mechanism to quantify and value the carbon storage services that forests provide by making forests more valuable standing than cut down, coderedd.org said.

Chief Chundu, who is a traditional leader in Hurungwe hailed the community nutritional garden as a practical way to enhance food security and nutrition at household level.

Read the full piece on the Zimbabwean